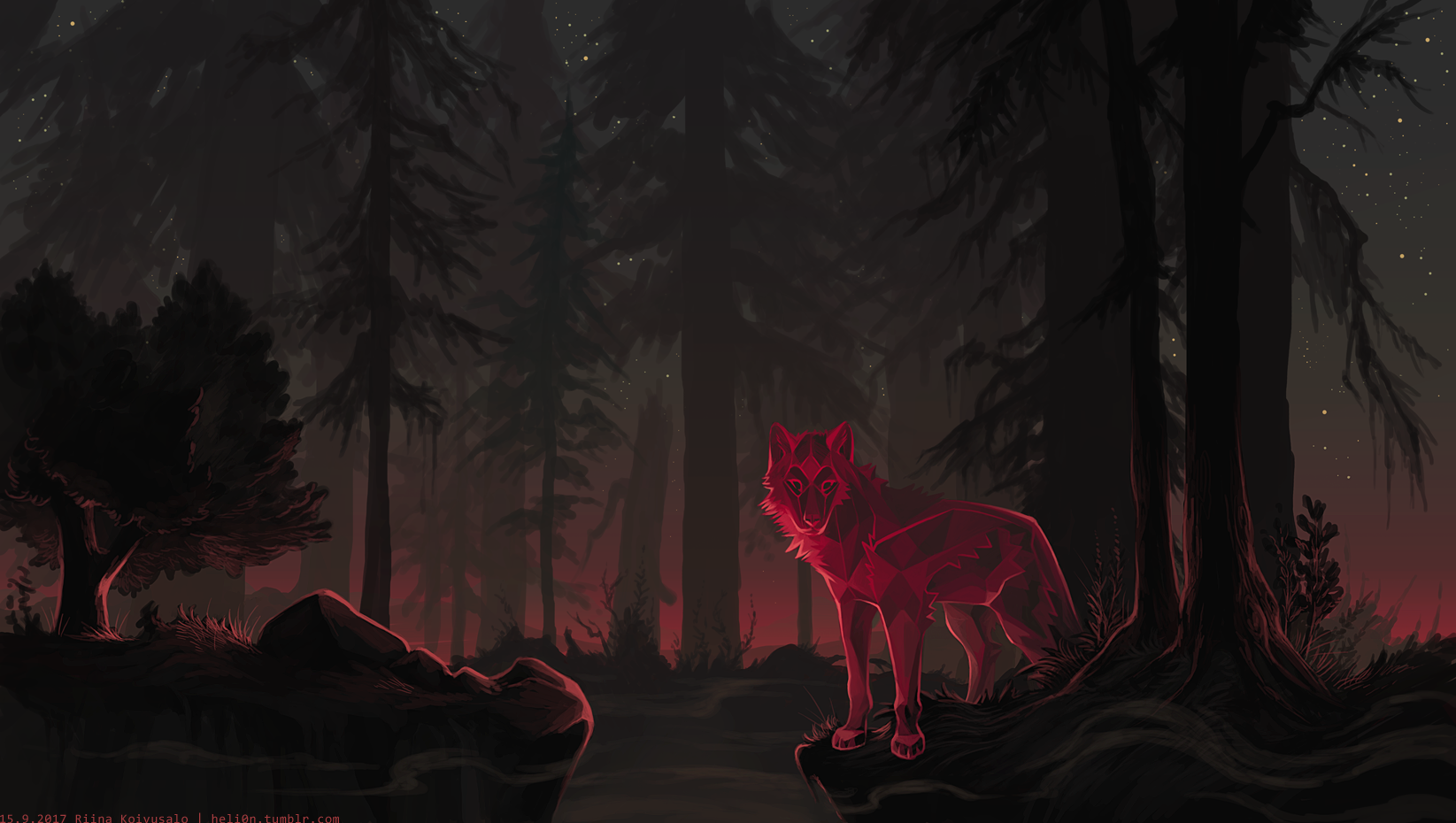 By AtrayaFebruary 1, 2019Pack Meeting
No Comments

* Atraya it would take her no time at all really to reach the clearing itself after she had forsaken her, what seemed, temporary oasis from the usual day. A long breath escaped her as the cold touched her lungs causing her to shiver with what pain and discomfort it caused her. A low breath was given as she exhaled deeply in hopes that it would warm her frigid insides. The sound of snow hushing across her paws was made as she would feel the gentle caress of it’s powdery substance across her legs as she would finally reach the clearings edge. Once she was there she gave but a moment to look and see who was around before walking towards the Alpha’s rock.

The distance from the eastern ancient forests to the Alpha’s rock was very little. Depending on who was there they might see her lithe, silvery white frame making it’s way to it. She was like a living ghost cascading across the landscape in silence. Once the boulder was reached she would take but a moment to observe the antiquity it held and the changes it went through with another season come and gone. Winter was now behind them and spring soon on the horizon, she hoped. The weather would be warm and easier upon her frame she thought. The sounds of her nails clicking against the stone would resound as she would make her way slowly to the peak and stop at the very edge. Oh curse the stone for it was cold to her paws. Discomfort would grimace across her face for but a moment until she finally settled down upon her rump, wrapped her tail like a blanket around her paws and there lifted her muzzle skyward howling for the beginning of a meeting. Just as her voice would touch the skies snow flurries would start to fall from the dark clouds over head. They where very light and airy. Much like you would find in a fairy tale in the humans books.

* Darth heard a howling coming from behind him and decided to pick up the pace as he trekked to the southern forest.
* Noshoba perks his auds to the familiar call as he smiles at his granddaughter. “It is always about stories youngin. But yes I have plenty of stories to tell as always. ” Ancient pads crunching the harden snow beneath as he turns toward the clearing. ” And make no secret my ribs are not coming through yet. But come it seems I picked a good day to return.”
* CwnAnnwn heard the familiar summons for a pack meeting. He turned his frame towards the Alpha’s rock before slowly picking his way closer, gaze shifting between those present as he pushed deeping into the gathering place. Large paws splaying with each step, keeping his legs from pushing too far into the snow, enabling him to move unhindered.
* Kova would turn an ear towards the sounds of a call that she had not heard in sometime now. It would be bitter sweet to her ears and the welling excitement that still held true to the greeting of her sister now held true to the prospect of a meeting. She would quickly nuzzle tug at her sisters coat as if to pull her along to join the meeting. She knew that her rank was far beyond her own now and she would tuck her head down slightly to ensure that this new wolf knew that Shukie was of importance. It was there she would start to make her way towards the center of the clearing where most gathered for a meeting. She glanced around her for Ayaka, having not seen her in many months, a frown played along her muzzle as she fae was not spotted and so thus she turned her gaze to the stone and the lithe figure silhouetted upon it.
* Kwa`ani heard her mother’s vocals and the call to assemble. It was a call she couldn’t ignore, on multiple levels. Moving toward the stone, her frame low to the ground, snout just above the snow’s surface. Her eyes shifted side to side to catch any shadows moving but otherwise her focus was to the north where Atraya sat upon the stone.
* skydancer ears perk aswell as she turns her attention toward the call looking about ready to pull a sprint. ‘sounds like fun.” she replies her banner waving though it’s not the lure of potential stories that keeps her near the older wolf as they start making their way toward atraya’s call. but rather consideration for his advanced age and larger bulk and never mind the fact her limps is worse this year and fur that simply no
* skydancer longer covers her whole leg as the scar tissue from her,.. encounter seems to have prevented the regrowth.
* Shukie followed along beside her sister, playfully tugging back at her scruff while she was afforded the chance. Pausing when her sister would she nuzzled and licked Kova’s muzzle, eyes seeking out the owner of the male scent then responded to Atraya’s call with one of her own as she would near the alpha stone, dipping her head in greetings before taking her place beside the stone, gazing  out at those arriving.

* Atraya perhaps it would be the very tinge of scents on the wind that caused her to perk up a little more. Was that one of her daughters on the wind she smelt? There would be an excitement all of it’s own welling within her, a rekindle of a flame that seemed nearly snuffed. She would wait the long moment for the wolves to gather and settle before there was a slow nod of her head. Wind would gently  caress along the wolves in the open as the snow continued to fall in gentle flakes from the sky. The world seemed to go silent now as her tone pierced the darkness to those who would hear it. When Shukie approached she smiled lightly, giving a warm nod before she turned to address the others “Thank you all for heeding my call. I know it has been far to long sense our last visit and  meeting.” there would be a light hoarse to her voice and she took but a moment to clear her throat. The normal visage of her frame would not be so this evening settled atop the rock, but in it’s place a lithe smaller frame that almost looked invisible seated a top it in the dark. “I would like to begin this meeting with a few announcements.”

* Noshoba gently nuzzles his granddaughter that was starting to look more and in some ways worse than him. ” Youngin you really need to chose your battles carefully” Falling in with her pace to make way to the clearing.
* Kova would offer Shukie one last nuzzle before she took her place at the Alphas rock. She too seated herself in the snow and glanced up momentarily as the flurries fell from the sky. She enjoyed the snow and would be plump still with a wintry coat so it bothered her none. She would now listen intently to what Atraya had to say.
* CwnAnnwn located a spot near those whom had gathered and settled upon his haunches. His thick tail wrapping around his legs as he drew his attention to Atraya as she began the meeting. His ears flicked atop his head as he picked up the sounds of others shifting and settling in for the meeting.

* Atraya her hues scanned all the wolves whom approached and seated themselves before she proceeded with her thoughts. “First off I would like to let you all know that WolfSpirits 18 year anniversary is coming up February 25th. I will be putting together some plans for celebration” she smiled lightly. “We have come such a long way…. and longer does this legend still have left to go” her gaze fell across the wolves present. “Stay tuned on that.” her paws shifted lightly. “OOC: Secondly I will be working on the website updates more feverishly now. I’ve added a redirect to the .org -> .net so if you go to the .org it should redirect to .net. I will work on getting profiles to work again as they should be.”