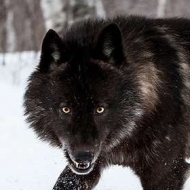 Basic Information
Shukie
Alpha of WolfSpirits
Female
Born on April 4, 2014
In other's dreams, perhaps or perhaps not.
Unlike Kova although they are litter mates, Shukie is primarily Arcitc Wolf, small percentage Timber Wolf as she inherited recessive genes passed down from ShukuWolf, her ancestor.
January 14 at 3:58 pm

Relationships
Nahala - birth Mother. (Deceased)
The winds say LockeWolf
Kyara - Adopted, cared for and taught Kova and Shukie from when she found them as small pups until the attack of the polar bear would separate them. The sisters often asking new arrivals from the north they crossed the fae's path in their travels. As time would pass, it was less likely she had survived the attack or had succumbed to the icy waters, perhaps trapped beneath it. (Deceased)
Kova
None survived
Ayaka, SkyDancer
Appearance
WolfSpirits Territory perimeter
Deepest of black like the midnight sky when there are no stars or moon. The darkest of browns in her undercaot can be seen when she moves about or when her hackles are raised. Burnt in a fire and losing most her fur, when it grew in again, it was of ashes and charcoal.
Obsidian rimmed in silver. The silver ring undergoes subtle changes depending on her mood and the situations she finds herself in.
85 unless she's feasted upon a recent kill. Shukie stands about 29" at the shoulder, on the larger side for a female Arctic/Timber wolf.
In the making

Black of color, the guard hairs exceptionally long, her undercoat predominately black with deep golden brown undertones. Her obsidian eyes were edged with a deep silver which she inherited from her Ancestor, ShukuWolf, along with the fae's body size as was typical of an Arctic wolf, perhaps a recessive genes had been passed along to her that she had little Timber wolf ancestry. Shukie is of typical size for an Arctic/Timber wolf.

Come close and you shall find out!
Extremely curious in nature and eager to learn any and everything she can, often seeking out others. She's not one to hesitate to take action when needed but will seek the advice of her peers if they are nearby. In watching her you will see an unusually calm yet confident fae. Be on your guard for she can switch from serious wolfess to playful pup in actions when you least expect it. Once you get to know her you'll find a friend and confidant, willing to listen when needed and give guidance from her experiences or direct you to those whom are more capable. She is slow to form deep bonds for she already lost her mother, Nahala, and most recently her adopted mother, Kyara. She still did not know if Kyara had survived the polar bear attack. Once the bonds are formed, it is for a lifetime and beyond.

Shukie was born of Nahala in the outskirts of the WolfSpirits territory near The Hallows along with her sister, Kova. She would come to learn after their return to WolfSpirits that she was direct descendant of ShukuWolf, First Wolf, Alpha of GlacierWinds. During her time with the WolfSpirits she had matured learning many lessons, some rather harshly and at the paws of Faolan. After many months of trial and error, more error than anything she had been accepted as Kin to the WolfSpirits and became pack. Some considered her a trouble magnet!
From her time during the quest before joining as a Pledge, Shukie came to know of her ancestor ShukuWolf and a Human named WolfDreamer, a Shaman of the First People and of the bonds between ShukuWolf and the Shaman. Spirits of The Shaman, along with ShukuWolf and Kovo, First Alpha of WolfSpirits, helped the WolfSpirits to restore balance to Kovo's original pack territory.Though the spirits of ShukuWolf and WolfDreamer had left her body, perhaps parts of them remained enabling her to know things she otherwise would not, giving her the insight and experience of a much older wolf.
The season would change from winter to spring in which she found herself accepted as an Assessment and just prior to the onset of summer accepted as Kin to the WolfSpirits. As time progressed into early summer she found herself advanced to Scout, much to her shock and amazement given her initial few months with the pack. She fully trusted her Alphas, Atraya and Faolan, knowing they knew best and perhaps saw something in her that she, herself, had yet to see.
A new lineage had been born of the Alpha pair this season and the pack had many new wolves passing through. Some remaining and others moving on after a time. It was a period of great joy and much stress as odd occurrences were taking place within the territory. The events were unfolding slowly along with their meaning. For now, the next few months would be ensuring the survival and safety of the Alpha pups.
In a most surprising change of events during the middle of the breeding season...no.. Shukie did not find a court and was not going to have pups.. but instead she found herself being offered the position of Delta, the first step towards Beta of the WolfSpirits. As the days passed and her training would begin Shukie came to realize, at least in part, just what all the Alpha's responsibilities were and wondered just how she would manage, having doubts she was up to the position as the right paws of the Alphas. Her first struggle was in the change in attitudes of various pack members towards her. Though she tried to put them at ease, her initial days as Delta were filled with much anxiety and second thoughts of accepting the advancement. Time shall tell if she is in fact up to the task. For now, she began traveling with the hunters, guardians and caretaker to better learn their duties for she'd need to be well versed in each rank's duties. She knew that the Alphas may find her unsuitable for the rank of Delta, let alone Beta and hoped she would not disappoint them in their choice. Along with the Alphas, she too was responsible for the welfare of all within the realm of the WolfSpirits Realm.
As the first month came to a close after her promotion to Delta she was nearly healed from aiding others of the pack to rid the territory, specifically the areas near the clearing, of a bothersome lynx. During the battle to drive off the feline, she sustained a severe injury to her shoulder when the lynx managed to rake her shoulder with it's claws. It was during her time of recovery that her ancestor, ShukuWolf, helped to put her at ease and give her some insight upon the rank of Delta calming her fears and trepidation's of her new rank. It was at the pack meeting after the Season's passing that she and SkyDancer became Spirit Sisters. A bond that slowly developed over her time here through both their adventures and misadventures, some not so pleasant but none the less growth and learning. Shukie was not one to bond easily with anyone beyond friendships.
Many trials and tribulations has passed since this last writing. An update is long overdue, the season of mating is upon the pack in the early days of 2021. Many newcomers (some old pack now returning as new chars) and new chars joining perhaps. The alpha fae has left her young male pup in the great beyond within the vale wherein Ayaka, the packs delta and Faolan, Atraya's mate are guarding that which the Morrigan has put asunder in keeping the pack safe from all that lurks in the darkness where others may not tread lest the be lost forever. Atraya returned with little energy left, caring for her daughter, yet to be named. The pack's 20'th anniversary is nearly upon all whom have been, are or will become a WolfSpirit. Changes are in the wind... but what you ask might the winds bring??...
More to come! And hopefully I'll keep this up better. Happy reading!!