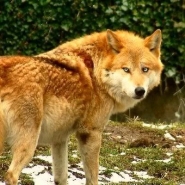 Basic Information
Shakira
Female
6. Born 03/30/2015
None
Timber Wolf
January 03 at 12:12 am
Relationships
Kastria
Kizac
Syfka and Tiryn
Appearance
Born and raised in Luna Pack located in the northern forests of the Boundary Waters
Tawny
Dark grey
95 pounds
Has a small notch in her left ear
Milestones

Born and raised in Luna pack located in the northernmost forests of the Canadian Boundary Waters, Shakira was the first born of three pups to her mother, Kastria. Her father, Kizac, a lone wandering male, was neither welcomed to stay with the pack nor inclined to after he had mated with her mother in the earliest beginning of the mating season. Aside from her two brothers, the pack contained only six she-wolves including herself; Rais the Alpha female, Ula the Alphas younger sister and Beta in training, Sila and Arren the two sisters who had been driven out of their birth pack, and Shakiras mother Kastria. Like a true family unit, the pack of she-wolves raised the pups together, training them for the wilds of the harsh world they were born into. Through the seasons the pups grew well, honing their skills and finding what their callings seemed to be, as well as playing the days away when the time allowed for it.
As their first year drew on and winter began to take it's grasp for the first time in the pups lives, a new threat arose unexpectedly; a pair of rogue males had come across their territory and, intent on securing the land for themselves, ambushed the pack before they knew of the males presence in their land. Whether they could entice the females to submit to them or not mattered little to the males, their main goal being to run out the ones who stood against them and to rid the world of rival sires pups. As one male worked to distract the females, the other fixed his sights on the pups, murder in his eyes as he leapt upon the closest pup that happened to be Shakira. Snarling out his hatred, he went for her throat but missed his target as she fought as hard as a barely seven month old pup could for her life, his fangs ripping a small gash at the base of her left ear instead of the life giving artery in her neck. As he squared himself for another attempt, Kastria slammed her weight against him and let out a fearsome snarl that only a protective mother could muster, the threatening tone enough to make both males halt in their tracks and  reconsider their next moves. Outnumbered and outmatched, they decided it best to find a less protected territory to lay claim to, turning tail and fleeing with the pack hard on their heels to be sure they were far off the territories boundaries. Though the wound in her ear healed swiftly to a barely noticeable notch, the hidden scars would remain until her last breath, the taint of mistrust for males seared in her mind like a white hot iron.
The season continued and the pack worked together to try to mend the trauma the pups had endured, redirecting their minds to a strict training that forced them to push back the memories of the attack and look to the future. With the first melt of the snow, spring gave way and yet another surprise was sprung on the pack. The Alpha had taken a mate, a male she had reunited with from her birth pack.
The she-wolves at first rejoiced for their Alpha and her newfound mate, until one day she left. No goodbye was given, no warning, and no sorrow aside from their own. Unanswerable questions and hollowed reassurances filtered through the remaining wolves of Luna, confusion and sadness sapping each one of them until they began to distance themselves from one another.
Ula, after coming to the conclusion that her sister wasn't coming back, left shortly after the Alpha, unable to find a reason to stay as she hadn't been fully trained to uphold the role of a leader.
Shakiras brothers, Syfka and Tiryn, emotionally and physically distanced themselves further from her and then each other until they eventually went their separate ways and left their homeland as well.
With her family in tatters and no hope of fixing it, Kastrias demeanor began to change as well, her once warm voice and touch became empty and her reassurances that things would work out few and far between. On her last day, with her tail limp and her posture slumped in a haphazard version of the confident golden wolf Shakira remembered her mother had once been, Kastria looked into Shakiras eyes with a small glimmer of the once radiant fire that used to burn within her.
"My daughter, my golden, perfect sunshine. Find your place on this Earth and never forget who you are."
The last words spoken before her mother, like the rest, disappeared without a hope of return.
Heart heavy and paws reluctant to leave the only land they had ever known, Shakira finally turned north and never looked back. With no true destination, she would wander aimlessly for the next several months, hunting small game to sustain herself and trying to avoid the borders of any other packs she came across, occasionally coming too close for comfort with a few as she was chased further still to the north west where she would eventually find a mountain range that seemed to curve protectively around itself, as if it concealed a secret it wasn't willing to share with the rest of the world. Curious and with nothing to lose, she would find herself stumbling into the pack that would soon become her new family.