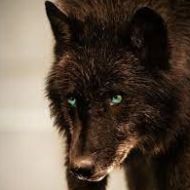 Relationships
Tei'ei
Kilgavik
died before his birth
Raneth
Appearance
far northwest from the WolfSpirits territory
Dark chocolaty brown
left: olive right: olive/orangishy
97 pounds
small scars most visible in summer when most his winter fur has shed been shed, can be found on his for left shoulder

His fur is a dark brown hue and when the sun catches it, it turns into a fire color. The tufts in his ears are a tan color and his underbelly and part of his chest bear a lighter shade of brown. His nose and paw pads are all soot black, and his tail tip has a few black furs in its end. At first you may think his eyes are both the same color but upon further examination a wolf will find one has a mix of yellow near the pupil and outer rim of the eye

He is usually very submissive, he actually enjoys humbling himself, and he is very aware of how packs function since he had spent most his life wandering many different varieties of them, looking for a stable home. Fearful as he is, he spends some time gathering up courage and sometimes it might seem he is fighting himself in his mind. For more see in roleplay!

Omak started out in a loving family, complete with an older brother, a father and mother. Not a year passed, and his father had disappeared without a word, possibly to the many cougars he barely managed to keep out. This had set the pack off balance, and in the rocky terrain they lived, prey was usually scarce. His mother and brother had to spend entire weeks out, looking for the smallest of meals.

One day, a lucky rabbit and vole were brought back to the den, the rabbit was shared with his mother and Omak, while Raneth would eat the vole. The next day, during he was scouting around, Raneth would look terrible. His mother had urged him to stay at the den while she scouted for prey which was what he had done. "Omak, I- I'm feeling terrible... don't tell mother please," he would tell young Omak. Omak was an obedient pup, he stayed by his brother. Late in the afternoon, Raneth coughed blood and passed away. Omak didn't know what it meant, but when his mother came back, she explained to him. He was so grief stricken that he ran away, still about a month from reaching his first year of age.

That was when he changed his name from Omak to Sanek. He was told that Omak meant 'good medicine' and he felt that he'd failed to save his brother and so the name was a pure lie. Sanek was a coyote name of some, so he took it as his and settled into a pack. He had lived there for a year and developed a certain love for some wolves.

Until one day, the alpha declared him an enemy, that he was to die because he was possesed. Sanek ran far, watching through tears as the home he knew for so long was now so distant. The more packs he'd gone to, the more terrible he'd felt. Demon! Liar! Sorcerer! One said after another. Not allowed more than a month, he started giving up hope till a pup came up to him and said "Just over the mountain range lies a legendary pack that will take in whatever wolves, no matter what background" the other wolves scoffed "The Wolfspirits? It's just a pups story, it's long extinct Sanek, you'll never find it." But legends were there for a reason eh? So he started his journey up the snowy mountains, and over and there... lay the land of dreams.