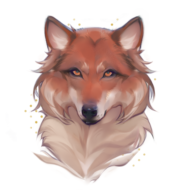 May 27 2016
Relationships
Galya
Artyom
The Elder
The Elder
Larissa and Marya
Rodion(Deceased)
Appearance
Sikhote-Alin, Russia
The majority of her coat is ivory with subtle white, silver, and rust guard hairs along her spine. The bridge of her muzzle, her ears, and the top of her head is rusty in color.
Copper and amber
51.3kg/113lbs
Rune’s left flank and upper thigh carry five long scars and the inside her left ear has an identification tattoo which reads F26S-A. Both her scars and tattoo are difficult to distinguish through her fur without standing close to her. Other scars and marks have been gained and lost over time, though none remain.

Her frame is cloaked in a dense ivory coat, that is relatively consistent in length with no exceptionally long guard hairs. Reddish-brown, russet hairs concentrate heavily in the cape behind her shoulders and on the bridge of her nose through the crown of her head up into her ears. Rune’s eyes are of a deep, copper and amber hue and despite their warm color, they display very few of the fae’s emotions.
On the larger side of her subspecies, Rune stands at the height of 86.4cm/34in and weighs 51.3kg/113lbs. Her tall, narrow frame, slender build, and long legs and toes are characteristic of her old world heritage.

Rune’s scent is heavily accompanied by the scent of herbs and earth, as she spends most of her time searching for, gathering, and preparing herbs and medicinal plants. Her howl is protracted, melodious, and carries with even syllabic emphasis, distinctly like the howls of her kind.

August 01st, 2020 - Advanced to Assessment and Caretaker in Training

February 25th, 2021 - Joined as Pack Member and Promoted To Caretaker

Cautious around newcomers and strangers, Rune appears to be very cold and distrustful to those she does not know. A caretaker at heart, Rune is drawn to the young, eager, and willing to learn. For this reason, she enjoys sharing her knowledge of herbs and teaching new wolves the ways of the pack. Rune is prone to wandering, which has lead her on multiple journeys away from the pack. She lets her guard down infrequently but does so most often around members of the pack that she has known the longest.

Born in Sikhote-Alin, a region in Eastern Russia on the 12th of March 2014, a litter of four pups was born. She and her littermates Larissa, Marya, and Rodion were born too early in the season, straining the resources their pack survived on. Spring was a welcomed arrival and the pups learned and grew as the months grew warmer and colder again. Her first winter was cruel and it gripped her pack’s lands tightly and swiftly, forcing most of its inhabitants out, though few remained. A much-needed hunt ended in success, but as the pack rejoiced, a fire-striped beast they shared the land with took it from them. The fight against the tiger left many wounded and her father dead. With the alpha gone, their pack’s structure quickly crumbled and she and her littermates fled. However, the winter remained relentless and her brother, Rodion was lost to the cold as she and her sisters trekked on. By miracle or curse, humans found the pups and nursed them back to health. When the scent of wilderness next met their noses and their eyes found no fence, the yearlings burst from their captors clutches and away into a world they knew nothing about. She ran until her lungs burned and her pads cracked, and it was then that she realized she knew not where her siblings had gone. Her howls went unnoticed until a stranger, ancient and plant-laden, found her. The Elder taught her much over the next year, like the foreign tongue and some basic herbs, and she helped it as it served as a healer for nearby packs. It was The Elder that gave her the name Rune, and she has used it ever since. Rune grew restless with The Elder and when the old teacher took on new apprentices, she felt it was her time to seek something of her own.

Upon her arrival in the WolfSpirits’s territory, Rune entered and progressed within the pack rapidly. Advancing from Pledge to Caretaker, Rune learned the ways of the pack and was happy to teach them to others. Unfortunately, a sensation she knew all too well would pull her away from the WolfSpirits. Rune has since left and returned to the pack multiple times, usually in search of The Elder’s wisdom and guidance or seeking something she will never find. Her time with The Elder also brings with it its benefits, and Rune has become an experienced and knowledgeable healer. Her time away from the pack holds many mysteries. The WolfSpirits pack welcomed Rune back once more, where she intends to devote her support and skill.

Last updated on 20 January 2022.
Illustrations commissioned through Furrirama, you do not have permission to use them in any way. [furrirama@gmail.com]