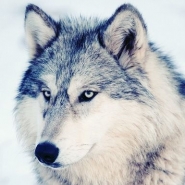 Her fur has a striking resemblance to the pack's former first alphess, Kovo. It holds a beautiful silver and grey hue with patches of dark grey and black along her haunches and nape that tapper to white legs. Her eyes are of a very light amber that look almost silver.

Kova was born of Nahala in the outskirts of the WolfSpirits territory near The Hallows along with her sister, Shukie. She would come to learn after their return to WolfSpirits that she had some history with Kovo, Alpha of WolfSpirits. She would develop her skills and mature outside of the pack after being fostered by Kyara, a daughter of ShukuWolf who is an honored guest of the pack. Shukie and herself had spent a year with Kyara to the far north even reaching the edge of the ocean. Kyara adopted and cared for the two sisters until an attack of a polar bear would separate them. The sisters would often inquire to passing wolves whether they knew of the fate of their adopted mother but so far no word reached them that she was alive.

After traveling on their own for a while the two sisters would find an unusual pull that would start to guide their path back to their place of birth. They started off back to the WolfSpirits pack.

Once Shukie and Kova arrived within the territory they where promptly thrown into a quest that would unveil an unusual and almost unbelievable part of their history which is currently now unfolding.