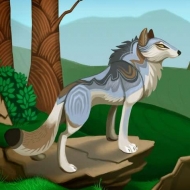 Faolan
This user account status is Approved
About About
Comments Comments

Basic Information
Faolán (Fway-lahn)
Alpha Male Of WolfSpirits
Male
10
Atraya
Tundra
May 30, 2018 at 10:23 am
Relationships
Silverleaf
Scáth
Carracan
Anya, Kwa`ani, Nalani & Fianna
Kokuro and Rook
Appearance
Land of the Midnight Sun
Stone hues
Light Amber
100
One set of mountain lion claw marks across his upper left flank stands out amid the various others of the hunt

His face is light gray layered atop a darker gray hue that stretches from the tips of his eyes and chest wrapping about the back of his neck and shoulders. Beyond and further down his back he was a layered mix of light and dark greys. Sharp amber orbs carefully and curiously watch all around him, echoed within his soft melodic bark.

Roleplay and find out

"There is a strength in sadness and in sorrow...one I hope not to see in your days as I had in my father's. But, son...there will come a day..." The golden hues of his father spoke with a much deeper clarity than the low vocals that coiled within the wisp of an unnatural haze. Even now, he could see the understanding of his father...the foresight that had been a mere afterthought to his own too youthful mind as it seemingly flowed through the darkened charcoal coat of his father's broad frame. The words entwined within the next like water within a stream having found the smooth curve of a rock, slowing and cascading into a soft trickled melody that held little in the way of discernible meaning. He gazed, falling deeply within his father's intense glance.

It was always then, on the crest of truly sharing the last moments, that he woke from the dream...old and reoccurring. His mind whispered of the last words he heard his father speak 'Go...I will be here upon your return...' answering the phantom's call with a whimpered sigh “I will see you soon, father...”

He whimpered not for the last days of unceasingly searching for his family but of the prospect of entering yet another pack's territory. For six months he had trekked across the wilderness of the unknown, tracing what he thought were his family's steps. They had led to nearly every single pack's territory between here and there, skirting the outsides of their bounds. Always did he follow, chased back as an unfamiliar and unwanted guest along the shadows of his family's path with more questions than answers following in his wake. At first he questioned why they were not there within the packlands...why they did not wait.

Less than answer, his mind wandered back to the winter before and to the day his dream concerned. Finally, a scout...no more paw holding and no more training. There was much more than adventure to be had. His family needed food and though other, more seasoned scouts were reporting back good news he was to venture northwest to the foothills. Long days had grown shorter and within the waxing light of winter's warmth...he set out.

Upon the setting of the sun within the third day his future stood upon the precipice, a juncture in the webbing of fates. He had come across the scent of prey, a sure sign of the movement of the herds his family hunted but beyond and beneath lay a curiously new presence. The scent was foul to him and felt much like abhorrence in its purist of forms. With the herd well within the packlands he took it upon himself to investigate this new presence.

From one thread to the next, fate offered little remorse for the passing of time as it occurred. Little could be remembered beyond the waves of white that overtook him in the mountains, leaving him nearly dead and injured. The haze fell and lifted from his eyes, rarely giving the fullest of their usually keen sense and within that veil he could see him...one who walked upon two legs. Trapped and injured there was little he could do but offer the protests of a broken body as the strange, frightening creature set about digging him out. Pain overcame sense, fear overcame logic, and curiosity fled from his thoughts. Thoughts that now darkened and that slipped into the unease of a subdued sleep.

Free of bars and of cages as he was, the noose and chain of his injured legs kept his freedom teasingly near but beyond grasp. For the longest of uncounted days he was cared for, tended to against his resurgent growls and attempts to bite. Fear lingered well into the days and months shared with the keeper of unnatural fire and little did he know that the human was trapped as well.

Late in its coming the first signs of spring arose, but winter held true. The snow blocked his passage back and even as the strength returned to his mended limbs he could do little but keep his distance from the human male. The man still came around, offering food and the curiously calm tones of his words...as ridiculous as they sounded to him. It was within the last month that he saw the cage that bound the man. He was dying and even within his weakened state, the man still kept true to his daily meetings. Rocks of differing places and holding the oddities of designs and delicate imprints were shown to him like trinkets, offered up with the waning tone of the man's knowledge. Though he gathered only from sight and smell, he took within him the love of the rock beneath him. It was something his father taught him as well...and here beyond that memory the spirit of his father outstretched its touch and whispered to him.

Spring broke the dam of winter's snow that held him from his family. Longingly he waited for the sun's first rays to crest over the eastern horizon. With its light the final strength of his body returned. He rose to find a stone of light brown hue set before his forepaws, the familiar imprints set within its rock-like canvas. It reeked of the sickeningly sweet fragrance of the human but he took it within his mouth...the gift that it was. There was no meeting that day...no lesson in the strange tongue of men. He woke to the final gift of knowledge the man had to offer, that of death and of parting. He found him huddled in his curious make shift dwelling, laying within the throes of a peaceful slumber that nothing now could stir and though he tried, the man did not wake. He held no love for humans as his father told him of the stories and legends concerning them, but here within his own story he felt a pang of deepened sorrow and of remorse for the loss of what had been a kindred spirit connected beyond the bounds of species.

The sun spoke of the changing of the guard. Winter was no more and life would awaken once again, but to this day in his memory there was no joy. He lowered the rock within his maw, placing it beside the man's body and rose his muzzle to the sky. Tears flowed throughout his spirit and he cried out within a sorrowed howl.

Old endings and new beginnings, he thought. The memory faded to the present as he marched on. He was entering the territory of another pack, following the scent of his brother that had been all that was left of his search. Autumn's voice rustled the leaves and foliage, calling to him of the presence of others near. He stepped forward to the brink and looked within...falling into the clearest of blue gazes.