Slate’s a breed if arctic wolf with a beautiful unchanging snow white fur. Slate’s a bit bigger than most male wolves and his thick,fluffy fur and tail gives him an appearance of being much bigger than he really is. But don’t let appearances deceive. beneath this thick fur lays a powerful wolf in his own right.

Slate’s an odd ball when it comes to personalities being he’s very unpredictable. Although Slate has a kind,caring side, this is well hide’in beneath a distant,unresponsive shell. This setback usually keeps Slate to himself and quiet. It seems the wolf is always in a bad mood and even when he’s not, he’s always alone off someplace.

As of late, Slate is rarely seen and when he’s not wandering the forest,he’s spotted near or inside his favorite bush. Due to recent events, Slate’s mental stability has been deteriorating progressively to the point where emotional intense situations trigger his explosive and dangerous temper. This temper has recently been displayed when his anger has been triggered due to a disturbing memory or flash back.

Slate’s turbulent past is unknown and unclear,even to him. Only a few details he can recall about his pass life as a living lab specimen. But one thing be sure,this wolf knows more about humans than he shows,having been raised by them practically. After nearly 5 years of wandering alone,living in an abandoned aircraft hanger at an airport and amongst humans who lived near said airport, ,Slate came across the wolf spirits pack. After a warm greeting and a shaky start, Slate was accepted as one of the pack and since then has resided with them. Still the lone wolf he is, one will mostly see him lounging around quietly,keeping to his self,sleep or not there at all.

Slate’s also a runner,able to run long distances nonstop. What he lacks in speed,he makes up for in endurance and pure agility. This gift,coupled with his experience of being on his own, has landed him as a position as scout. The biggest stand out Slate has is his odd British/Australian like accent, followed closely by his pure white fur,iris less silver eyes,pink nose and his size.

* Slate was really close to leaving behind a couple guys. Slate, who had just charged the man with the rifle, pretty much took a dart straight above his shoulder blade. The old wolf had a big tollerance for tranqs, having been hit with them quite a few times back in the day. He’d leap for the guy, since he has to reload anyway, jaws agap, aiming for the man’s upper thigh. If the man doesn’t do anything, he’d have a wolf trying to rip his leg open. Cranky on the other hand, had seen enough. He eases the collective up more, actually lifting the copter off the ground. With the control of a seasoned chopper pilot, which he was, Cranky settles the copter into a near rock steady hover a foot off the ground. The rotor wash would now be a gale force wind….or near to it anyway “LETS GO!!!” the old pilot yells loud enough to be heard over the 4 bladed rotors beating. [END]

* Slate would be trying his best to chomp at the man’s arm, paws scrapping and struggling to pull himself closer. The tranq, a heavier dose it seemed, would be working over time now. The old wolf’s visage would be blurring now, becoming clouded. Slate mind was slowly becoming muddled and his attempts at taking hold of the man’s arm would slow. Soon, Slate would be no more than a big, sleeping wolf on top the guy.

Slate was a gifted story teller in the sense that even when you didn’t want to be bothered for one reason or the next, he at least knew how to push the button to engage you or make you smile…at the very least. His interests were within the mechanical realm; with oil, gears, and petrol. Regardless, he was one of the few that didn’t need to read a room before entering or opening his mouth. The sheer fact that he did either made for a better day and gave testament to his natural ability at understanding the cogs of humanity. I still remember one of the first memories of him speaking with me in private. It was over a plane of all things…flying through his area to Cuba. A once in a lifetime event and only the pilot and himself probably knew of the flight plan…to a T. I never asked if he got his shot…if that memory had been made at the last, but it is a memory with me. Wherever and however we believe he is…either at rest or in a great beyond one fact remains…that the memories he sought and helped forge are ours now, and in those fragments of life relived he too lives on and will literally never be forgotten. 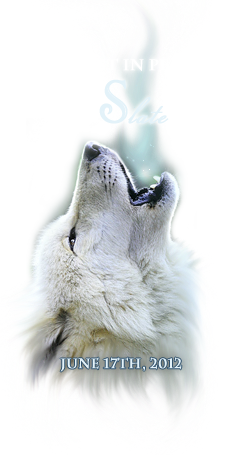 “Finding grace through the thickets of a bitter tale.
A ghostly soul of a lively body now layed to rest once more.
While weeds tickle the skies far above,
A call of the spirits rise in his lifeless form.
A last breath given to the Earth’s beauty,
Her grace accepting his kind offer in return for her gift of life.
Once more a life returning to the soils of this world,
A winter ever changing into Spring..
Another season passed but surely not forgotten.
In death there is new life,
In life there is new death.
A being of high spirits shifting through the howls of this life.
A soul now released to it’s rightful place as the Wolves cry.
Paths of the unknown,
Now truly known..
While one allows the arms of eternity to embrace them sweetly.
A final peace,
A final tune of the skies.”

The snow falls slowly and lonely eeriness fills the air.
The clouds grow dark
but the white earth softly glows.
Paws drag through the cold powder worn and tired.
Life becomes a struggle just barely holding on by a thread but continues to push on.
For what purpose does the young life end so soon? Was there not more
to be done in this lifetime? It is not long before the last step is taken and death once more claims another.
The mountains and the forests cry for the loss of a wolven heart.
Howls of anguish are carried to the sky as their hearts and spirits break.
Snowflakes continue to fall attempting to cover the memory of the golden eyes that once sang to the moon but now rest in peaceful eternity.
This life will never be forgotten.

What can you say about a man who comes to a wolf roleplaying channel and says “I’m gonna play a cat!” and somehow makes it seem like it was always meant to be? Slate was a good wolf, regardless of what form he took. Loyal, Honest, always out to get a laugh from you or brighten your day. Where he has gone there is no hunger, no pain, no suffering, no loneliness and no lawyers. I hope he gets the rest he so sorely needed.

Slate was such an awesome person. I remember him being there always ready to talk or RP in the middle of the night or day. He was one of the first Wolfies to greet me when I first RPd in wolf spirits. I will always remember him.

In memoriam of Slate

As the moon rises silently over the trees, the forest itself appears to listen with bated breath as a single mournful cry rises into the air. Soon this single cry is joined by others as the pack mourns the loss of a beloved one. As the forest falls silent again, seeming as if nature herself feels the packs pain, a shooting star streaks across the sky. Was it a celestial body or the spirit of the mourned, joining the ancestors to forever watch over those left on this mortal plane.

Slate was always the guy that brought the life into a room. he was never shy about wanting people to laugh, or just talk to him. I believe he was the best of humanity, and his life was too short for the amount of good he was. He was always good at making me fall over laughing.

One of my favorite Slate characters had to be the crazy squirrel, i think it had an English accent maybe. It had the television in the tree and would just torture wolves below with words and flying nuts. One of those characters he brought in to perk up the chatroom when it was a little slow. He always knew when to do that.

I’ve known Slate for over…10-15 years now. He was one of the first people I’ve met when i joined the rpg world and he always asked me to draw his characters then email them to him lol. We would talk for hours on some nights on the phone but usually we stuck to the internet to avoid costly phone then cellphone bills. Ahh evolution of communications…He also always asked me to take pictures of trains and buses of Canada. He loved to compare them…then asked me to try and draw what he though would be an amazing hybrid of his design….which i sucked at royally. When i learned of his death, i felt like i was struck by a bus myself. I had spoken to him the previous day, just about something he wanted me to draw and what not, typical nonsense…..but i know he’s in a better place now.

I didn’t know him well..but the quality of the memory’s he left with all of you speaks volumes for his character..for his spirit. Rest well.

Please fill out the form with your lore, story, poem or just words you’d like to share about Slate! We would love to collect as many as possible!