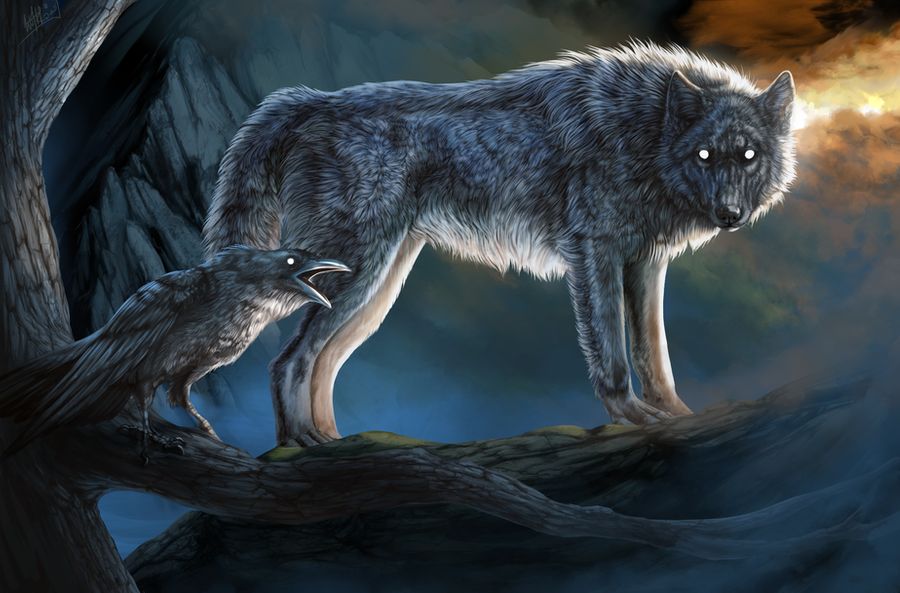 By AtrayaJuly 11, 2019Calder The Mystery, Storyline
No Comments

<Myrkeer> The cave remained dark and some what foreboding and the Myrkeer hadn’t meandered back for another visit either. What an unusual encounter and journey this has been indeed, but what was the reward at the end of this? Life lessons learned? Experiences gained for trust and love? Or was there some underlining this whole thing. Regardless the silence reigned over them within the cave except for the dripping of pockets of water, the musky smell of moss and the occasional clank of bone against stone.

* Morrigan would have been within the ruins themselves looking for something in particular. She didn’t have sight but her nose could pick up on almost anything. ‘Hmmm… not here. HE must have it.’ and it was there the old wolf started back to where the pack had last left off.
* Kwa`ani caught her sister’s scent and promptly forgot all about the pup and the other male stranger. With leaps and bounds she tackled her sister even as Fianna tried to slurp her muzzle. “SIS!!!!!!!!!!!” toppling over and pawing at fia excitedly
* kamaitachi would wake up not seeing wolves right away and let out a chuff. She was still where they had flushed the bear out and wondered where everyone went
<Shukie> ::For those within the caves they’d find Shukie’s scent upon the right side of the walls and the pyramid of rocks every so often::
* Nightshade was leaving the entrance of the last cave/ruins, she whined while she was looking for Atraya .
<Atraya> Nightshade would find that the scent of the pack lingered and was fairly close to the outside of the cave. They where nearby, outside, waiting for the Myrkeer to show up once more. If she followed their scents, and even the smell of a recent kill, she might find them.
* Kova would have been resting after the hunt and taken what pieces she could to fill her belly. Satisfied she would have rolled to her side and lounged. However the scent and smell of others began to stirr her, and she woke. She blinked a few times and seemingly was embarassed by the amount of sleep she took. She rolled to her belly and stood, shaking out her pelt, she tried to gauge just what was going on around her.
* Fianna would roll contentedly with Kwaani for a bit, scuffing snow into her ruff just like old times, licking and nipping at her muzzle a few times as well. For those few moments, she let go her worries over Calder and the Mykeer, and the craziness over the soul tokens, and ll the rest. She’d missed her sister. “Thanks for staying safe sis.” She finally pulled back to say, her honey eyes serious.
<Calder> Whatever kept this male from the others for so long, would, well keep him. He had failed in finding a certain trinket but stumbled upon another and it was there the silvery trinket lay around his neck. He would be moving with a quickened pace from the east up the slope to where the ruins where. He knew the pack hadn’t moved and only hoped he could make it to them in time.
* Nightshade watched behind her to see if she got followed, as a scent of the pack was getting closer, an other scent was also coming in.. blood? Something was murdered.. following the scent she narrowed her eyes to see if they’re close in the direction. Now she paced her movement and chuffed forwards.
* Ayaka had licked clean the gash she’d recieved from the hunt, though it stung it wasn’t deep enough to e serious and had already scabbed over. As she noted Kova stirring, Ayaka would chuff toward the fae as she remained by Shukie.
* Shukie nosed Ayaka gently, “It’s good to be fully with the pack again. I failed in what I set out to do tho I hope it was for naught.” As she spotted Ayaka licking a wound, she nudged the fae’s head aside to assess it and then further clean it between lulls in converstaion. Her own token, a wolf carved out of obsidian lay at her paws. She spotted her sister in the distance as well and
* Shukie would offer up an exicted chuff before greeting others nearby as she nodded to hose making their presence known in one fashion or another.
* Kilmaten frowned at the brown wolfies that ended up ignoring him. He decided that he doesnt like those oversized puppers. How dare they leave mid conversation!? Outrageous! He saw his dad coming over and leaped up on him, immediately forgetting about his brief conversation. “Wakie wakie sleepy head! Look at all the doggos!”
* kamaitachi noticed others as she stood up now and sighed as they hadn’t left her alone. She let out a chuff as she looked around wondering what happens next
* Nightshade focused on the horizon, she would see now the pack as her directions are right. Nearing up she would chuff towards to Shukie.
* Kwa`ani mumbled briefly as she watched the golden filigred eagle feather floating down towards the snow having been knocked free of her scruff in the tussle. “I’m so glad to see You are safe and well, sister!” She was glad to see all that were nearby. For the time being, the reasons from being here were forgotten in the reunion.
* Nova found his son charging at him, and flopped over to let him jump on him. He playfully gnawed at him and gave him a few happy licks. “This is pack life, little one. You will learn to love them all in due time, and become one of them.” Once finished speaking he pushed his son off of him which fell over, both getting up and shaking their coats off.

<Myrkeer> The wolves waited long enough. He had been informed of who and what still lingered and it was now time the wolves faced off with the their destiny. The resounding crunch of snow would perk up the lounging wolves. They rested long enough. Tree bark would be heard snapping and breaking under great weight. The trees themselves looked like they bent against a great giant now lumbering towards them. Every wolf who was outside the cave and waiting would see this.

<Myrkeer> Large lumbering paws would continue to press through the trees until finally that familiar overly large body would make it’s way into the open. His eyes narrowed and his breathe hot and heavy against the chilly winds. Even up here summer couldn’t touch it. He would be met with a pack of wolves. The same WolfSpirits as before but it seemed like some where there and others not. New faces he »»
<Myrkeer> »» didn’t recognize. No matter… he would approach before stopping along a flat surface. There was a dead silence that washed over him save for his heavy breathing. Huff. HUff. He reclined upon his haunches and rose up to his full height, opened his jowls and let loose a deafening roar that only a old, large grizzly could. ROOOOOARRRRRRRRRRRRrrrrrrr! The wolves would feel the very ground beneath them shake and the sound of icicles falling from the ceiling inside the cave could be hears.