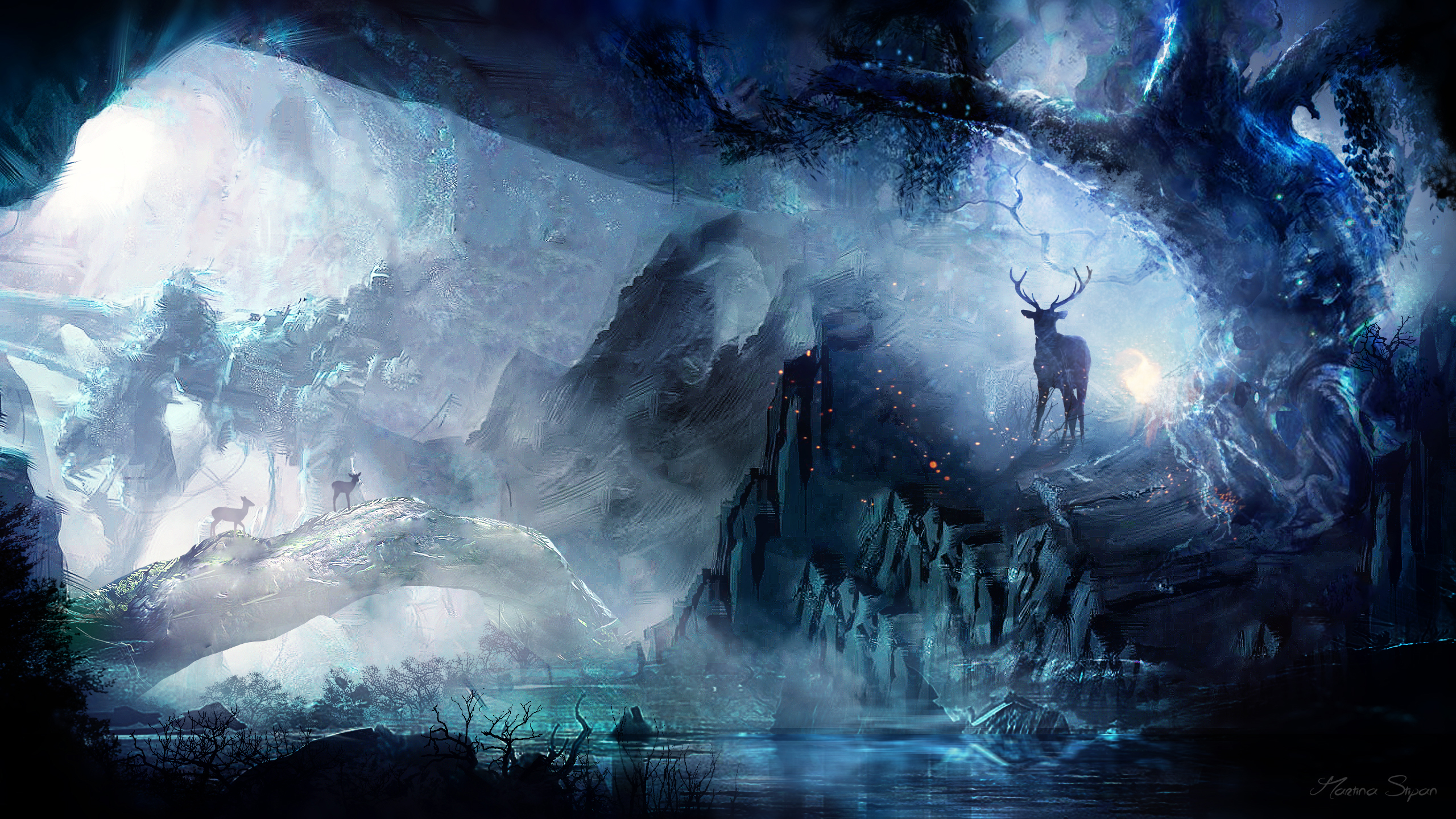 A Flicker Of Hope | Chapter 11

By AtrayaMay 27, 2019Calder The Mystery, Storyline
No Comments

As the trio of wolves Ayaka, Kova, and Nightshade stood amongst the oddly undworldy place, they would make note that near the tree’s most extended branch that hung alone there would be a flicker of light every now and then that might catch one of their eyes.

* Fianna would would hold Calder in a corner of her mind all his own, as she had waited and watched over her mother, and even as she scanned the other wolves she would look for his frame among them, hopeful and worried at the same time. He still held many of the answers she sought. Finding Kajika rising she chuffed to him, hoping he could help them free Atraya somehow, though no doubt he’d already been mulling the problem over. As her mother spoke she would nod reluctantly, not wanted to leave her mother’s side, yet she would free her if she could. Hopping down from the bone pile, she would begin to search in a ring, ever widening around the chained alphess.
* Ayaka would refrain from answering at the time, worried such noise would alert things she didn’t wish to alert. Eying the deer more closely she crept several yards into the cavern. What was wrong with their eyes? Perhaps eating these things would be a bad idea but.. “Do you see the deer?” She whispered to the other’s. “I wonder if we should attempt to catch one. This place seems almost too.. Reverent for a hunt.” Scanning the
* Ayaka tree next she noted the glint along the branch above. Could she get there for a closer look?
<Ayaka> ((end))
* Kwa`ani ‘s heart pounded in her chest seeing Atraya moving about, just far enough away that the voices didn’t travel. She easily heard blabber mouth’s call but knew it was not the signal. Her tail swished, the only movement and one that hsould not have occurred but seeing Atraya and Fianna moving aroundmade her over excited that her tail took on a brief mind of it’s own until she tamped a hind paw on it. Hopefully, no debris tumbled downward.
* Kova would remain beside Ayaka and Nightshade when something caught her eye. The faintest of glints. She turned her head to address it with her eyes fully focused and tilted her head. It would glimmer then was gone. An ear turned to Ayaka’s words as she would now focus on the deer. Her own eyes narrowed as she would observe them in the shadows. “Perhaps.. but I fear we don’t know these caverns at all, so, we would have to catch one quickly and avoid a chase…” she whispered before turning her hues to the glint once more “Then… there’s that?”

As the wolves began to fan out in search of a key, they would find that despite the ever looming darkness soon upon the outside world it was still very much illuminated from the inside. Darker corners would still be visible to them and depending on where they searched each would find a different and unique trinket.

The deer would have lifted their heads up from grazing to look upon the approaching wolves. They stood there for a long moment, milky eyes staring back, before they huffed and stomped a hoof in protest. However… it would seem as though after “showing who’s boss” to them, they simply turned and began to walk away slowly. With no other care in the world nor haste to their step to get away from the predators. As Ayaka and Kova would make their way closer towards the tree they would see that the odd thing dangling about in the lights shaft would be a small object, no bigger than a creek rock well weathered and washed to the shores spinning about on a piece of string. It would be elongated with a pointed end. Humans would no doubt call this a key. It would be tied up and hanging on the  furthest branch.

* Atraya ‘s eyes would fall unto Shukie as she would let loose a low breath, a thoughtful breath. She was exhausted and tired but held her own. “Gather those who are here and look in the cavern for a key. These humans always have something that slips into the socket in the back…” she grumbled being confined to a humans bounds once more. “We don’t need to linger any longer. If Sky is around, have her go ahead and try to find Calders tracks and get him back here. If he is who he says he is…. he might be needed in more ways then one. I just wish-…” she paused “I wish I knew more. How I got here. All I recall was following the sound of what sounded like rook but to much my blindness, it was a raven leading me to a place of ice and snow that collapsed before my feet. Darkness… that’s all I remember until now.” odd that such a piece was missing from her.

As the wolves would rummage around for something useful, there would be human trinkets scattered about. In Kajika’s corner there where helmets and armor. Even swords that where both stuck to the ground and laying about. Fianna would find much the same, however, something shiny and round would poke from the surface of a scattered yet clumped pile of bones. It was hard to discern what it was but it was shiny.

As Fianna would swing the torc around her neck she would find that oddly enough, it fit fairly well. Clearly whoever wore this torc was either a very burly woman or a burly man with a large and thick neck. Or perhaps it belonged to something larger? Kajika on the other hand would clank the metal against the ground as one sword fell. As one of the swords fell, it would flick up a bunch of bones and coins would suddenly be flung up, twisting about!