By AtrayaMay 2, 2019Calder The Mystery, Storyline
No Comments

The pack had remained within the confines of the north for sometime and finally the pack started off further north, to follow the instructions given by Calder to head to the Mykeer where it was told their missing Alphess was.  A new male wolf had come upon the pack by the name of Kyseran. Nightshade had also managed to catch up with the pack and now joins them in their temporary move.

The world around them continued to remain cold and locked within the jaws of winter. It seemed not much changed here just yet for spring was just barely able to get it’s grip on the landscape. Only a few small tree’s managed to shed themselves entirely from snow. The wolves would find the air crisp and refreshing as they pressed along the path to the Mykeer. There was no sign of Calder or any others for the most part throughout their journey and only a few sign of life here and there seemed to present itself to them. After leaving the small clearing and sanctuary they once more would find themselves scaling the mountains again. Switchbacks would meander left and right up the hillside but it looked as though it wasn’t very steep nor a long climb to the next opening. Tree’s would continue to litter the path and not deviate from the thickness of their usual clearing either. There was a sense of familiarity here. As the wolves would cross around a small bend they would find themselves greeted by the sound of falling water from great heights. It would be a sight like no other and perhaps even take their breath away. Their eyes would cast long upon a beautiful fjord. It seemed almost unearthly to be here. 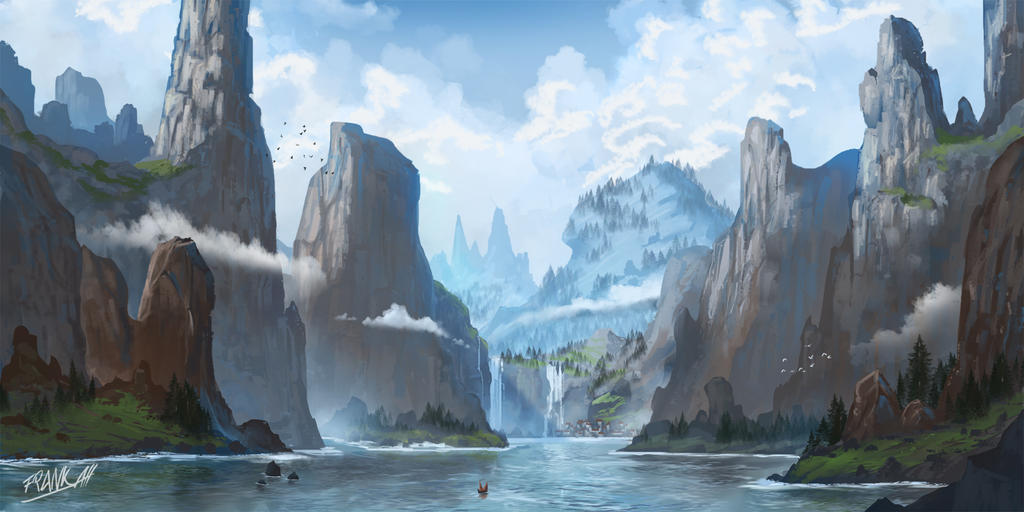 The world around them would continue to remain dark for a moment longer until the sky began to become iluminated with various colors of blue, green, purple and even a hint of red. The northern lights where very strong here it would seem. The pack would notice the resounding smell of prey would no doubt linger in abundance to the pack of wolves. The trail that would be well placed by Calder would continue to be headed to the north and beyond the fjord. If the pack continued on, there would be a well placed path for them to follow that would once more switch back up towards the mountains again, but this time it wasn’t as sharp and held a more ‘straight and narrow’ path. It was up to the pack how far they’d go.

* Kova her hues fell towards the horizon and the thought of the other wolves now assaulted her mind. She let loose a low growl but then stiffened it. Where they finally in another territory? “Herm…” she said in passing thought to Fianna’s own words. “Perhaps so, or, perhaps he meant the boulders ‘where’ the mountains? As the boulders around here seem fairly non-existent? Besides… this is more open, a better chance at seeing someone come?” she would say to Fianna seemingly moving closer to her.
* Fianna considered, continuing on after Ayaka who seemed to be pressing onward to the north, following Calder’s scent almost. It was as if the scent taunted her, reminded her of his words. “Alone.” She shivered slightly, picking up her pace subcontiously as Kova moved nearby. “He seemed to mean exactly what he said though..” she murmured, “this isn’t a pool either, its too large.” She huffed slightly, glancing at the path ahead, and then around at the darkness, before lifting her gaze to the lights that began adorning the skies. The idea of going on alone almost frightened her, but would it be for the best? For the pack? She harbored these thoughts despite Shukie’s words, yet her training as pack and her duty to obey the command of her elder’s held her back for a while longer. His could merely be a trick, meant to weaken them even more, despite his seeming thoughtfullness thus far. If he really wanted to be helpful, why the games?
* Kova as she continud to move alongside Fianna she would nose the fae lightly before she offered in words even while her hues gazed up to the bright skies over head that was basking in beautiful colors of all sorts. She took a deep breath before she opened her jaws and spoke in a more hushed tone to address Fianna. “I feel we’re near to this place Calder had spoke of…” she would then lift  her head up to allow her voice to be projected “Aye… I feel we’re not close enough yet.” her tones no doubt lathered with concern for their alpha’s and now her beta and young Kwa`ani. What happened to them?

As the wolves pressed on they would be met with no hesitation by the wilderness, wilds, nor animals therein. It seemed as if they where some how…excpected. The wildlife and world moved aside for the traveling wolves and still they where met with welcome rather then force. Calder’s scent would no doubt be stronger and stronger the more north they went and along the path they continued to follow. Up and up the mountain they would go until finally cresting over a natural ridge, it would once more flatten out almost unnaturally and greeting them would be a frozen pond with two large boulders on either side and a beautiful canvas of northern lights to greet them

* skydancer continues along the path keeping a cautious eye out for not the brute even if the scent suggests that he is the likeliest to cause trouble but anything else as well it wont do to be caught in a trap pf some sort by allowing her senses to become trapped in one set expectation and get caught by another
* Fianna ‘s breath was winded, for they had travelled miles now up the mountain, yet she felt all the same that a strange energy thrummed through her, that she could go on and on forever, if it meant finding her family. When at last they crested the ridge she stopped, chuffing quietly to the others. “This.. ” she paused and glanced around. “This is it.” Her voice was confident, though a strange wonder laced it as well. “He must be here somewhere.” As if on impulse she loped forward several long paces, until she was near the front of the group if possible, her posture tall and her eyes narrowed at the scene. It was… stunning. How had such a place been formed? Her heart thumped. Lifting her head she called, her voice low and urgent, unable to keep her voice silent, the nerves and season and hope and fear she would never see her family again all coiling and needing release.
* Kova her eyes would fall upon Fianna and as she loped ahead she too woud follow, quickly closing the gap between herself and Ayaka as well skydancer. She would let loose a few chuffing barks but other then that, she kept her tones to herself. She knew not who lingered or what. She ushered a low nudge to Ayaka as well. “If he’s here…. he will make himself known.” she whispered against the cold night but she couldn’t help but feel the same wunderlust as the young fae. The season still holding it’s very last grip but no doubt soon enough, it too would be gone. What was Calder’s plan anyway, she thouhgt. Lure them here to this beautiful place and then what? For what? and why Fianna only.

Fianna would find that nothing but the wind would offer a hushed whisper back in response to her calling. It was like a soothing hand caressing her in the dark. As if to some how offer “Do not worry little one… all will be revealed soon.” There was a sense of perhaps eyes, but maybe it was from the folklore of old where the ancestors danced and spun along the northern lights to forever watch over their family upon the earthen plain.

* Ayaka would come upon the ridge, full of ethereal beauty, the pool, crystal clear yet black as ebony and reflecting the green light show above. When Fianna bounded near, perhaps a few paces ahead, she tensed, ready to leap after the fae but she stopped, only to announce their presence, she flicked her ears back but gave no reproach. She too could understand. “Yes. No doubt he will. Perhaps we should remain as close to each other as possible, yet still get a bit of rest now, for the coming day?” She nosed Kova, glancing to skydancer as well. She too would wonder at Calder’s plan, even as she wondered where Shukie was. Had it been her plan to approach this location from an alternate direction? Hopefully nothing had hindered them. “Be well..” she wished them softly upon the winds. Settling onto her haunches at the southern tip of the pool, she would wait.
* Kova gave an agreeing nod to her sister Ayaka and would slowly lower herself onto her haunches and make herself more comfortable on the northern edge of the pool. It would no doubt ease her mind to ensure all possible ’rounded corners’ could be covered. She wanted no surprises save for her alpha’s return and her sisters as well Kwa`ani’s. Wishful thinking but for now she would no doubt fall victim to the beauty of this natural place and watch the night sky dance above them in it’s brilliance.
* Fianna hadn’t expected an answer, and the winds… her companions from the time she was a pup, where the only voices she heard in response. They were her constant companions. Ever urging her to go places, to do things, to run faster, to be better, to be wiser. The winds held tales she had always longed to hear. As the others began to settle near the pool, Fianna would find herself too restless for the time being. She moved toward the boulder on the eastern side, settling her back to it, and lifted her eyes to the skies, feeling her restless energy slowly settle as the night drew on.